Why train two cues, when you can train ONE. 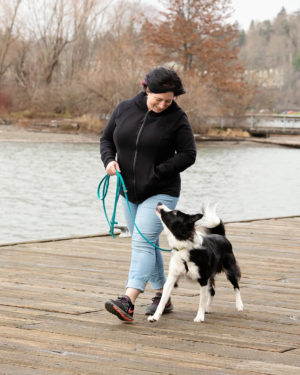 It is no secret that I LOVE teaching FOOT targeting skills with many different objects and in many different situations for canine fitness. Targeting skills are very useful for fitness but I am learning that they may not be everyone’s favorite thing to teach or that time is limited. “Training minutes” can be precious to busy handlers with limited time and often are needed to train behaviors for performance sports. So, I have a NEW shortcut plan….

So with little Extra, I taught “FOUR” which means front feet on one object and rear feet are on DIFFERENT object.

You will see in the video that:

I used a clicker for part of this and a verbal marker toward the end. You will see that I initially decrease criteria when changing objects (this is something that is often forgotten). The training is NOT perfect, some of my clicks are late, I talked too much etc. but we obtained the desired position in just 5 short sessions.

And just like that, one cue instead of two!! – Go to Bobbie Lyons Canine Campus Blog